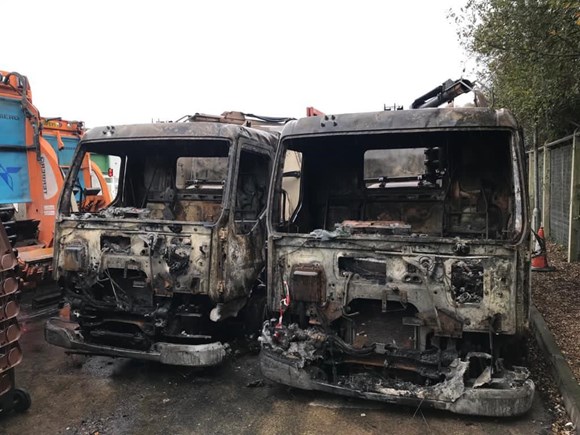 An investigation has concluded the major fire, which sent plumes of smoke into the air and was seen for miles, was most likely caused by a short-circuit.

The report concludes that the accidental fire started around 1:20pm under the bonnet of one of the waste collection vehicles, most likely caused by the heavy rainstorms and high winds experienced in Chickerell that afternoon. This apparently led to rainwater entering the vehicle’s electrical circuits, causing a short circuit, igniting the internal components of the vehicle and allowing the fire to take hold.

The report also notes that a lightning strike hitting the vehicle cannot be ruled out as there were several strikes in the area during that time period.

The fire then rapidly spread to the other adjacent vehicles as the flames were ‘wind driven’ eastward towards the site building.
Upon arrival at the scene, DWFRS’s Officer-In-Charge swiftly took the decision to protect the building as the water supply was limited, while waiting on other crews to arrive and help tackle the blaze. At its height, 15 fire engines and additional support vehicles attended the scene.

There were no indications of the fire being started deliberately. CCTV did not reveal any suspicious activity and there were no signs of the site being broken into.

Waste service employees were on site between 6am and 10am on the Sunday as part of their regular duties, but the vehicle where the fire started had not moved since Friday afternoon.

Dorset Council officers, having quickly restored waste collection services in Weymouth and Portland by hiring vehicles and borrowing others from elsewhere across the county, are still working on long-term solutions to the loss of most of the waste fleet covering the Weymouth and Portland area.

The fire has left waste collection services with reduced resources; the council also lost vehicles based at Ferndown and Wareham which were in the Crookhill depot for servicing. This could lead to disruption elsewhere in Dorset if an area has a collection vehicle breakdown in the near future.

While the full cost of the incident is still unknown, our insurance arrangements cover us for such an incident.
Councillor Jill Haynes, Portfolio Holder for Customer and Community Services, said:

“I would like to thank DWFRS’s Fire Investigation Officer for their report. We will carefully review and discuss its content to see if there are actions that we can take to reduce the possibility of another freak occurrence like this happening again in the future. In the meantime, we will continue to provide these vital services while working toward getting permanent resources to replace what was lost in the fire.”

“I can confirm that this was an accidental fire, caused by a weather-related incident. It started in one of the vehicles before spreading to 21 other vehicles on site. The great work of our crews prevented the fire spreading to the building, allowing Dorset Council to fully reinstate their services within 72 hours.”

What an amazing day yesterday!! Massive thank you to all who supported us on this special day…more photos on our facebook page @swsportsnews @Dorsetechosport @AIR1072 @chesilradio @weyandportinfo

Camp Bestival, East Lulworth – 29 July to 2 August. Expect congestion and delays in East Lulworth and the surrounding area, particularly in Wool, Wareham and Sandford – all weekend, but especially on Thursday 29 July for arrivals and on Monday 2 August for departures.