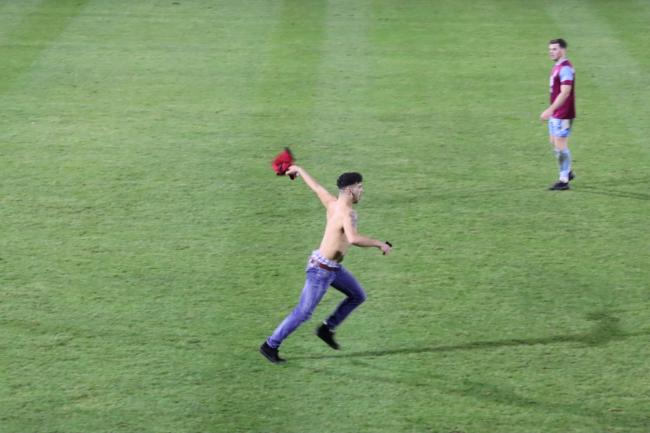 Drunken spectator ‘made a fool out of himself on national television’ after he ran onto the pitch topless during a Weymouth FC game, a court heard.

Aaron Gould, 21, ran onto the pitch during the Weymouth v Halifax Town game at the Bob Lucas Stadium on Saturday, December 5, 2020 which was being shown on BT Sport.

With the game at 2-1 to the visitors, Weymouth FC were in possession in Halifax’s half and the ball left the field of play.

Gould, of Strodes Lane, Charlton Down, then entered the pitch and took his shirt off, performed a cartwheel and caused the match to be paused by the referee. He was intercepted by stewards and later arrested by police.

The game ended with the Terras falling to a 5-1 defeat as Weymouth FC said a ‘minority of fans let the club down badly’ and branded Gould ‘an absolute idiot’ on its Twitter page.

An absolute idiot has just ran on the pitch. No place for that in football.

“It was the first match after lockdown and the match was broadcast on national television, namely on BT Sport.

“At 6.50pm in the evening, officers saw a male enter the pitch. He removed his top and ran around topless on the pitch. He left the pitch and was detained by security staff.

“He identified himself as Aaron Gould and he was arrested for going onto the pitch.”

Gould, appearing at court unrepresented, pleaded guilty to going onto the playing area at a football match.

He explained to magistrates how he had attended the game with his friends as he reconnected with them following the second national lockdown. Gould recalled how running onto the pitch was a ‘spur of the moment’.

Gould said he was unemployed but he had submitted an application to join the Royal Navy and was awaiting a response.

“We had come out of lockdown and I had not seen my friends for a while and it was simply a foolish mistake. I had too many drinks and it was a spur of the moment thing and I didn’t realise the consequences. I apologise to the football club and everyone on the day.

“I don’t want to jeopardise my future and I am looking to join the Navy.”

Magistrates asked Gould how much he had to drink, in which Gould replied “eight to nine beers” before the game.

Asked why he ran onto the pitch, Gould replied:

“It was a foolish mistake at the time.

“I was with my friends and I was intoxicated, and I thought it would be funny but it wasn’t.” 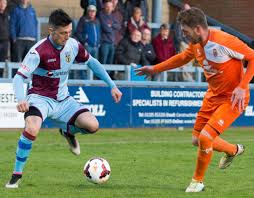 Chairman of the bench Mr Humphries accepted that Gould was clearly remorseful for his actions, but noted that the defendant had ‘made a fool of himself on national TV’ by running onto the pitch.

“You said so yourself that this was a stupid act that you carried out and obviously influenced by having too much alcohol.

“It is really compounded by so many people in this country have been looking forward to going to football matches and you in some respect were privileged to go along to that match, so it was compounded by the fact you abused what many people regard as a privilege.

“On top of that, not only did you make a fool of yourself, you made a fool out of yourself on national TV.

“You have offered your apologies to the club and you realise what you did was very wrong and foolish.”

Magistrates issued Gould with a three-year football banning order, in which he is prohibited from visiting the Bob Lucas Stadium four hours before and four hours after a Weymouth FC fixture’s kick-off time.

Within this football banning order, Gould is banned from being within a five-mile radius of stadiums which are hosting fixtures involving the England and Wales national teams within 24 hours of the advertised kick-off times. This restriction also applies to Weymouth FC’s away games.

Gould was also given a 12-month conditional discharge, meaning he will be sentenced for this offence at a later date if he commits another offence within the next 12 months. He must pay a victim surcharge of £22 and costs of £85.

Unfortunately due to health and safety issues, we’ve had to close Sandsfoot Castle. @DorsetCouncilUK has been notified.

Members of our team noted that two vertical cracks had widened on an internal wall within the castle.