Home > Station News > Riding On The Crest Of The Airwaves! 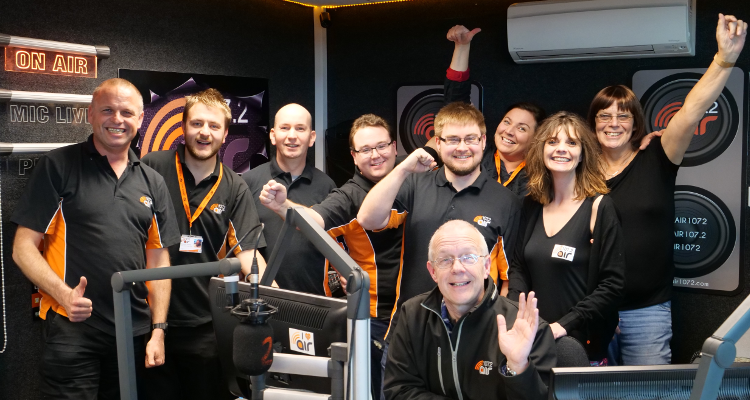 VOLUNTEERS at Weymouth’s community radio station are ‘over the moon’ after they were given a new five-year licence.

The new licence, authorised this week by regulator Ofcom, means that AIR 107.2 will be on the airwaves until May 12, 2023.

Run entirely by volunteers, the radio station, based at Westfield Arts College, helps train volunteers up in radio skills – from presenting and producing to technical work.

The station plays a range of music, including live performances from local artists, and is aimed at those 25 and under in Weymouth and Portland. The AIR crew team gathered in the studio for a celebration after the announcement was made.

Station Manager Derek Greenacre said the team were ‘over the moon.’ He said: “We are very pleased to be able to bring AIR 107.2 to our listeners for another five years. We would like to thank all our listeners for their support and keep listening to AIR 107.2.”

He added a big thank you to Westfield Arts College, adding: “It wouldn’t happen without them.”

Mr Greenacre said the team had some ‘exciting plans’ for the future of the station which they would be revealing soon.

AIR 107.2’s main fundraising event of the year is Party In The Park, which will be held from noon at Lodmoor Country Park on Sunday, August 5, this year.

Dr Venetia Randall, Creative Director and Head of Events at AIR 107.2, said this year’s event would be the ‘biggest and best one yet.’ She said the new licence was ‘amazing’ because it gave the team the longevity to build on their past successes and build up their offering and events for the future.

She said: “We have so many talented people in so many different areas. We are all volunteers. We do it for the love of it, we do it to help the community, because we all love living in Weymouth and Portland.”

AIR 107.2 Technical Director Ben Tolley said that volunteers who have gone through their training programme had gone on to work in radio and broadcast. He said: “We are relieved and really glad to receive the new licence. It means all the hard work has paid off.”

He urged people to get involved in AIR 107.2, whether it was to join as a volunteer, to learn a new skill via one of their radio training schemes, to listen in to the station or to donate to help keep them on the airwaves.